Last night the devastating floods in KZN caused South Africa to be plunged back into yet another national state of disaster. An “independent agency” has been earmarked to manage billions of rands re-allocated from some new “loan” for disaster relief in KwaZulu-Natal.

Not downplay the gravity of the situation but the reality the ANC has a very poor track record when it comes to managing disaster relief funds or any public funds for that matter is not good.

It’s the perfect crime in South Africa, defraud the taxpayer and use your position and power to keep the legal system spinning indefinitely or just simply get away with it. Nobody goes to jail, nobody collects a R200 grant. 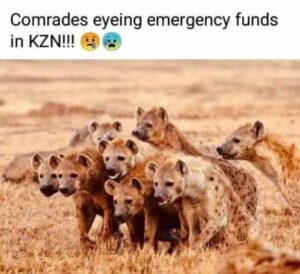 Poorly maintained water, roads and housing infrastructure across all major provinces could have contributed to averting the scale of this disaster but that inadequacy receives very little mention but is in essence why so many people are so badly affected.

Corruption robs everyday citizens of basic services that would allow people to live away from water sources (where the largest contingent of informal settlements are). Badly maintained infrastructure has wide-reaching effects on society.

Some of the water management infrastructures in South Africa were built +50 years ago and have not seen a single cent of maintenance or development spent on them since.

In spite of the reliant population more than doubling and in many areas of exponential growth the ANC Mamparras cannot and do not invest in infrastructure due to the rampant corruption.

Invariably when ministers and the cadre crew get caught with their treasonous fingers in the till they disappear into the woodwork or embroil the courts in lengthy legal battles where the taxpayer is funding both their prosecution and their defence with swindled funds.

It’s time to start seeing the apples falling off the top of the tree and into the mud with where the people live. Dragged down into the muck, charged, prosecuted, with monies recovered. Any government official should have NO LEGAL RIGHT to private attorney defences and the courts should make absolute extreme examples of anyone caught committing these acts of fraud and treason against South Africa to send a clear message to future officials and tenderpreneurs.

KZN is the traditional stronghold of ANC yet as the voters watch their lives and possessions float downstream without support. We wonder if it will finally dawn upon them that this is a literal consequence of re-electing Mamparra’s into positions of power.